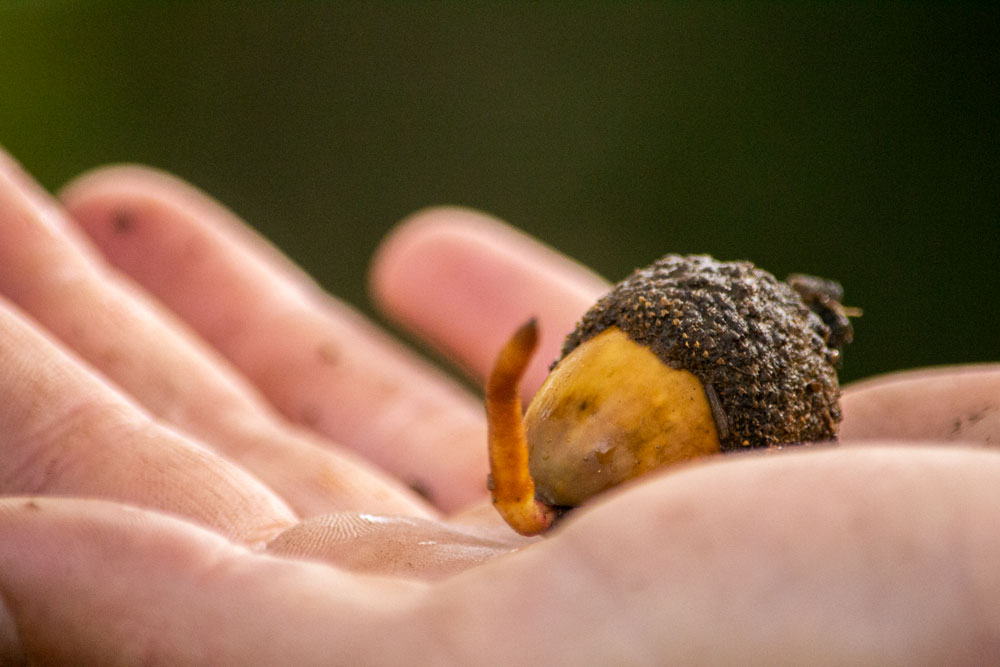 The plan to plant a forest garden in the old vineyard was hatched in 2012. It is a beautiful area of around one hectare, between the Roman Road and the ancient chestnut forest. It is protected by mature cork trees to the east and to the west, and the south aspect is a wide open vista, with the Muxagata river snaking down to the Mondego, and the high mountain peaks of the Serra da Estrela in the far distance.

The vineyard had been untended for a decade, and was overgrown with brambles. The edges were planted with ancient olive trees, and some chestnut trees had found their way in. The first task was to remove the old rusty metal wires and slate posts that had been used to train the vines in a previous era. This was a gradual and time consuming task of clearing the zone by hand.

Each time we cleared an area, the land responded with more species of wild  herbs and flowers and new sproutlings of cork, oak, hawthorn and medronha trees, and over time, the area was naturally returning to forest.

In 2016, a wild bush fire swept through the valley. In the forest garden, it consumed all the ground cover, and left the young oak and chestnut trees with shrivelled leaves and a black coating. For the next 18 months, the transformation that took place there was incredible. Some trees did not survive, but others seemed to literally have passed through a trial by fire, and not only did they survive, but they seemed to leap into a new phase of vitality and growth. Many new oak trees had naturally germinated, and the biodiversity was at a new level.

Now the reconstruction of the Seminario building is progressing, and we are preparing for the visitors, the Forest Garden is an important focus for us this winter. We invited an old friend Miguel from Spain to come and help us with the planning and logistics. And now, with his expert help, this project is progressing beautifully.

This is what Miguel has to say about working here:

We are working in a small area of an existing and productive forest, to transform it into a highly productive and diverse environment, providing food for both humans and wildlife.

This forest garden will support us to re-discover our connexion with the forest, and with Nature, as it has been for millenia, and we humans are part of and not separate from it. Human actions can have a destructive effect or a beneficial one , and it all depends in our intentions and commitment. We were once good stewards of our landscapes, and we really want to be again as part of Nature , taking into account that we are where we are in time and place.

Our first work then is to connect with the forest we want to be in, and from there, start acting in the most positive way as possible for all beings. We humans need a wide range of foods in our diet, including fruits , mushrooms, nuts, and even meat and fish in some cases. But at the same time, we want to have more wild foods in our diet that can feed, cure and nourish us, and have nice flavors.

In practical terms, we are establishing a non irrigated food forest, so first thing we did was to cut the dry grass , dead trees and some bushes, to renew the energy of the place and have organic matter laying on the ground to feed the system and mulch our new trees for more water accumulation under the soil. The first big effect of this operation has been a huge mushroom production on the site , a lot more than in the untouched forest.

There is a natural spring  that will be used  when needed, especially in the first few years until the new trees are established. The planting of the new trees, among the existing ones , is being done in a pattern of contour lines,  between 5 and 8 meters apart, as contour lines aren´t normally parallel. We want to retain as much water as possible under the ground because it will be used for all the plants there and will recharge both  the underground and overground waters. But we also want to encourage extra water retention in the plantation stripes , so that´s why we have piled up all the organic matter we had cut in those contour lines, in stripes of about 50 cms wide, and in those stripes is where we are placing tree seeds and young trees and vines. The mulch , because it includes some branches and trunks , will also protect the new trees from wild bore attack . And for that purpose too, we are trying to connect mentally with the wild bores and tell them we are here to benefit the ecosystem and help create more abundance, for all of us. We don´t want to make war on them. This might seem a little crazy to some, but this kind of communication  works for some people and animals, as we are all a part of Nature. So , in those planting stripes we are piling up trunks, bushes, grass, leaves and  branches from the  pruning of the existing trees, always with the big material underneath and the small on top, to accelerate decomposition and minimize the fire danger.This will also create plenty of beneficial fungus right under the new trees, the best company they can have. Talking about pruning, when we prune we open light for more fruit production of any kind (as it happens in Nature when a tree falls down), we feed the soil with organic matter and, probably most importantly, the trees send a message to the microorganisms of the soil telling them to change to an abundance mode. So , to explain it simply, they start producing food much quicker  for all the plants around them, including the new fruiting trees and vines that we´ve planted taking advantage of that “abundance” moment. The pruning has been done for thousands of years in many different healthy ecosistems of the world , including Amazonia and the European old forests. And to be more precise, most of the oldest trees in the world have been pruned many times, or they wouldn´t have that opened shape, they would have a straight one. It´s not that we have to prune all the trees , but is very useful to prune some forest trees every few years for producing more food. In this well prepared field , we are planting Hawthorns,Chestnut trees, Ash trees, Willows, different Oaks, Quinces,  Plums, Peaches, Nectarines, Apples, Pears, Grapevines, Pomegranates, Citruses, Olive trees, Fig trees. Some are being planted  from seeds in the definitive spot, some from cuttings and some small trees coming from a nursery. Later, we will  graft on to the root stock in some cases.

This is a high intervention food forest for human food production and we´ll be very happy to share some of the fruits and nuts with the wild life. In other parts of the forest, there will be actions with less intervention, always aiming to improve and diversify, reduce the fire risk and increase the capacity of the soil to absorb water. We are trying new  solutions with ancient bases for trying to solve the new challenges of our time and ecosystems , including food production in those ecosystems in a regenerative way. 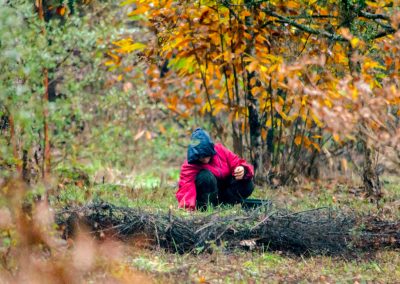 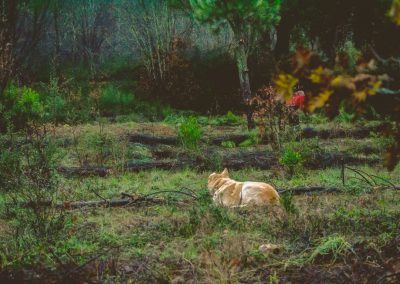 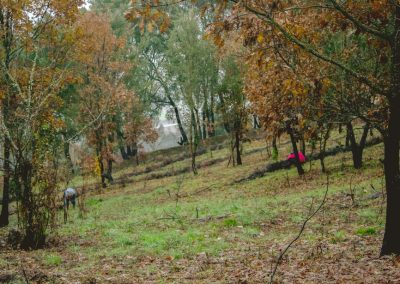 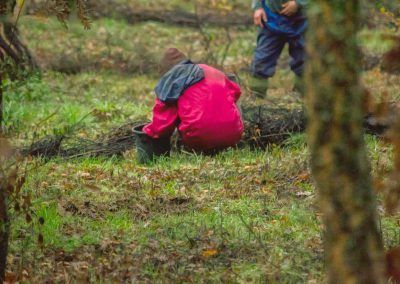 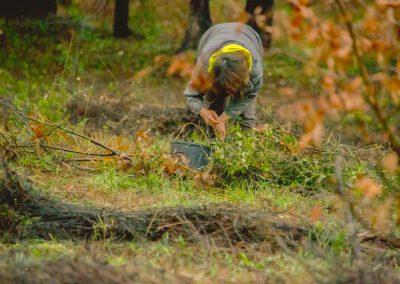 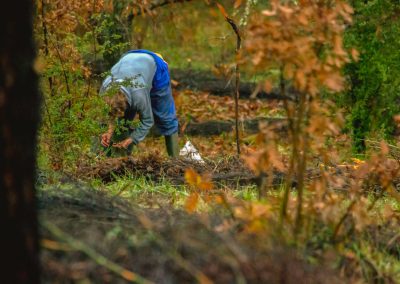 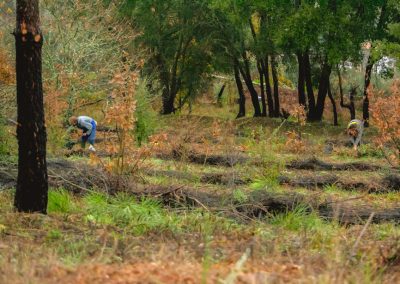