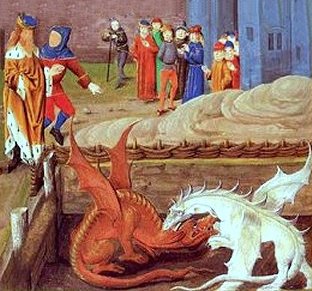 When Vortigern decided to build his castle in the Black Mountains, he commissioned the best stonemasons and carpenters and gathered all the materials needed for its construction. The work proceeded well, and the moat, outer walls, and many of the inner chambers were taking shape, when all of a sudden, there was a mighty roar from beneath the Earth, the land shook with a great tremor, and the castle was destroyed. Vortigern was proud and determined and would not be deterred by a mere earthquake, so the construction began once more. But soon enough, once the castle was partially completed, yet again – that mighty roar, an Earth rending shake, and all was turned to rubble. On the third attempt, the castle was very near completion, with cap stones upon the battlements and turrets, when the most violent trembling began, which did not cease until the whole castle was in ruins.

Vortigern gathered together his council of wise men, and after some deliberation, a judgment was reached: “A sacrifice is required, of a child with no father, and his blood must be sprinkled upon the ground, to appease the angry spirits.” Messengers were sent throughout the lands, and in the remote north, they discovered a boy whose mother declared that he had no mortal father, for she had been with no man. His name was Ambrose, and he was a seer, a child with the vision of a Merlin.

The boy was brought before Vortigern, and told that he was to be sacrificed to pacify the earth spirits. “Sire, I ask you not for clemency”, replied the boy, “but it is a false mission, for my death will not serve your goal.” Intrigued by the apparent wisdom of the boy, Vortigern demanded further explanation. “Beneath the castle hill, there lies a lake, and beneath the lake two dragons, one red and one white. The dragons have awoken from their slumbers, and now they must be freed.” Vortigerns army of workers began digging, and they did indeed encounter a lake, and after much labour, they revealed the dragon’s lair.

This is a medieval story, one of many, that chronicles the subjugation of the ancient world. According to the tale Vortigern killed the Red and the White dragon, and the era that followed is what we call history: a period characterised by domination, conquest, mass enslavement and almost perpetual warfare. Our folk memory is full of such stories, depicting the conquering and subduing of the wild and powerful forces that lie within Nature, magical forces that still echo through the misty vales and around the abandoned hilltop forts at dawn. Nowadays the ancient temples, built originally to connect us with the realm of spirit, are often ringed by highways, bombarded by microwaves, and encircled by fighter jets.

After numerous invasions and periods of domination, by Barbarians, Romans, Vikings, Saxons etc, and the subsequent legitimisation of the conquestors stories, the memories of the original ancestors, the crops they planted, their ceremonies and practices, seemed to have been lost in the mists of time.

Yet our ancestors, in the time before history, lived for thousands of years in peace, with a deeply spiritual connection with the Earth and the Heavens. When the conquests arrived, they defended their practices, their teachings and the lands of their forefathers with full passion, often choosing death rather than enslavement. And in the passing of those times, the teachings were not destroyed, only hidden from view, behind a veil of secrecy, and visible only to those who have the eyes to see.

Over the centuries that followed, these subtle and timeless wisdoms were easily overlooked whilst we focused mainly upon survival. The red and the white dragons have been slumbering within the Sacred Earth for millennia, and now the Earth is shaking once again, and it is time to remember dragon wisdom.

This is the time of ‘The Great Turning.’ Such a time has not occured on this Earth since the deglaciation that marked the beginning of the Holocene era, when the prediluvian civilisations were destroyed, and only those who were able to live in harmony with nature survived. But think about it. Those survivors were our ancestors, and now we get the chance to re-establish balance once again….

Sacred Earth is a community initiative, formed to gather investments for regenerative projects for the New Earth, including Vale das Lobas. Any like-minded individual or organisation can join this investment community and  buy shares in Sacred Earth.