A sustainable, peaceful and healthy world

A  sustainable, peaceful and healthy world

The Earth is sacred, and it is our task to take care of her wisely. This is a period of emergence and emergency, a crucial moment in our history, in which we must come together, transcend divisions and unite in a vision of Peace – a lasting World Peace where each generation hands on a better world than the last.

Vale das Lobas is a model for rural regeneration, based on a holistic approach to restore health, revitalize community and regenerate biodiversity, by the creation of economically and environmentally sustainable businesses.

Like many areas in Southern Europe, the rural landscape of the Muxagata valley was once well managed and provided an abundance of food and materials, and gave livelihoods to large populations.

During the 20th century, triggered by the industrial age, and fuelled by war, oppression and the yearning for change, waves of migrations swept people away from their villages and farms and washed them up in the tenements and factories of big cities. In the 1970s, families from the Muxagata valley resettled in Central Europe, Brazil and USA, leaving only the elderly to take care of the lands; the final custodians of an ancestral tradition. Where sheep and goats once roamed the high serra, now only the eagle soars over uncared for terrain. Fruits and olive trees untended and unharvested, became entangled in bramble and broom, and the land fell gradually into a state of abandonment. Now there is a new wind blowing, a post-industrial yearning, mainly within urban populations who reject the hollow resonance of the throw away culture, and are searching for a deeper connection that links them again with ancestral tradition.

The Vale das Lobas initiatives encourage and support the return of original migrants, and provide opportunities for a new migration from urban centres, for land based and nomadic workers.

This model could be successfully applied in many landscapes that have suffered similarly from depopulation.

For the visiting public, the experiences at Vale das Lobas will encourage, support and inspire the reconnection with Nature, and provide inspiration, education and healing for all. The land and building restorations integrate ancestal traditions with innovation, and demonstrate that agriculture and construction need not be at odds with Nature.

Vale das Lobas is comprised of a Well-Being Realm that offers Health programs, courses and conferences, and a Discovery Realm that hosts a range of discovery experiences, from wildlife watching to sacred arts festivals.

Through the establishment of Serra Lusa – a community-based association – abandoned areas of land, within and around the valley, are being repurposed in the service of wild Nature, in collaboration with Rewilding Europe, municipal councils, and the Diocese of Viseu.

These facilities and programs will be open for visitors by summer 2022. 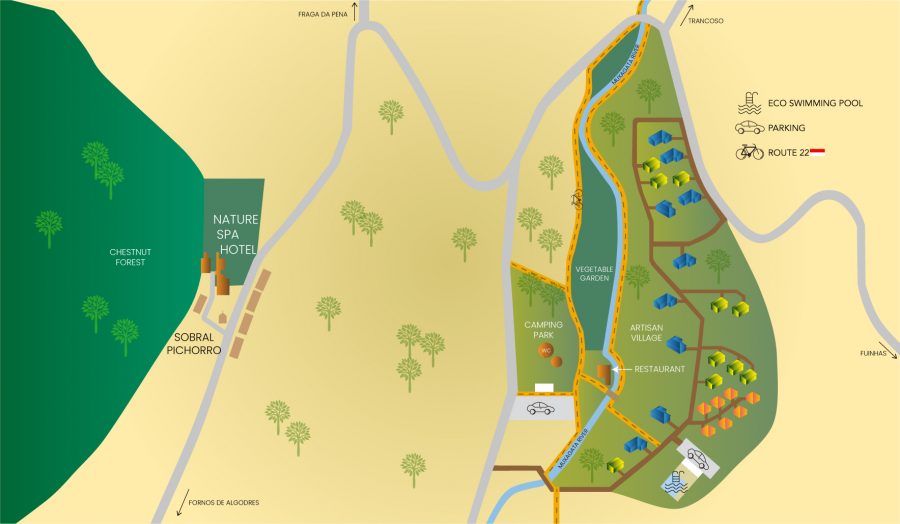 “But Man is part of Nature, and his war against Nature is inevitably a war against himself.”

All of our global ancestors shared the same vision: that Nature, including animals, plants, rivers and mountains, is alive and conscious.

There is a new vision gradually emerging, that re-embraces Animism, from a post-Enlightenment perspective. In this retelling of an ancient story, we will finally remember what we have temporarily forgotten,  that we are part of Nature.

Once the world was complete, and the gods were marvelling at their creation, a discussion began concerning humankind. These creatures, unlike all others, had the power of free will. They had the potential to take care of the Earth, as kind and loving benefactors, and spread harmony and love throughout the world. Or they could become tyrannical, self-important, and destructive in their hunger to demonstrate their power over each other and all other creatures. Surely both aspects would always be present? There will be golden ages, where humankind embraces the light, and dark ages, when they are tormented in ignorance. This must be so! It is the nature of free will.  Humankind must grow from infancy, to eventually embody its true adult nature, through all the painful stages of development. And the completion of this cycle is by no means assured. Humankind must make the critical choices alone. The gods knew that they could not intervene in this. “But perhaps we can assist” suggested the sky god, “give the support of a loving parent.” “The knowledge of how to maintain balance and harmony must be planted somewhere, so that those who are willing to seek it can become guides to others,” said the ocean goddess. “Perhaps deep in my ocean womb, so they feel drawn to return to me.” “No, that is too remote,” said the mountains. “The top of my highest peaks would be better. Those who come there will carry their far visions back to the valleys, and share them with others.” “These are all good suggestions,” said the moon, “but we have to remember one thing. Every human has the whole of creation within her. The world is a reflection of her nature. She can create heaven or hell on Earth.” They pondered a long time. “We must put the truth in the one place that is accessible to all, but where they hardly ever think to look. This way, the discovery will be gradual, and when completed, it will be irreversible.”

And so, it was decided. The key to self-realisation would be hidden within the human heart.

As a subscriber, you will receive regular newsletters to your email, informing you of updates, programs, and offers.