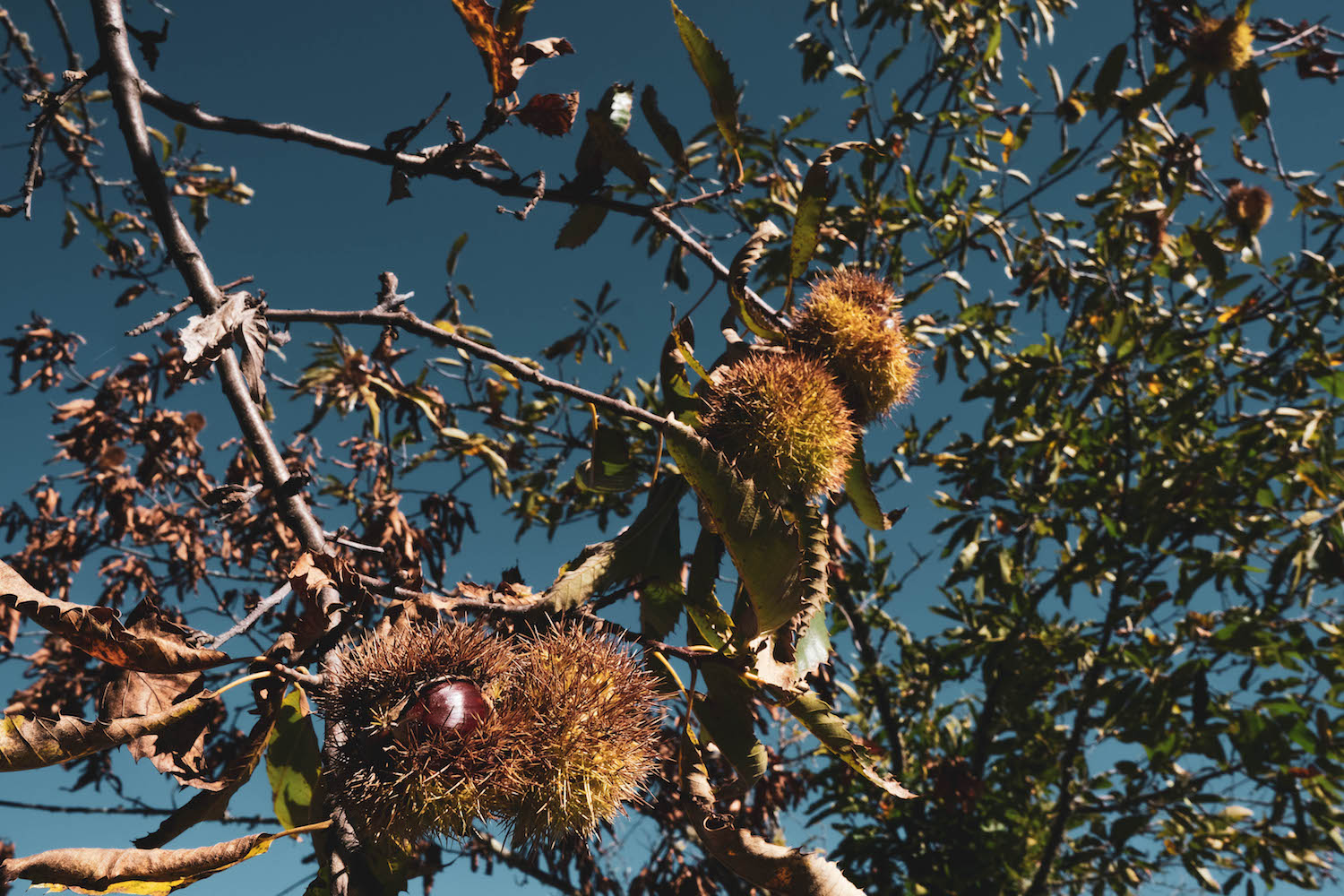 …there was a valley high in the Beira Alta region, in the foothills of the Serra de Estrela range, the highest mountains in Portugal, and it was known as Vale das Lobas. It is at the eastern edge of the Dão wine region, and the main products are olive oil and wine. There is also an abundance of apples, pears, oranges, lemons, limes, figs, peaches, cherries, plums, persimmons, quinces, strawberry fruit, and more. Maize, rye and other grains are traditionally grown here.

The Ribeira Muxagata runs along the valley, between the villages of Aldea Nova, Fuinhas, Maceira, Sobral Pichorro, Mata and Muxagata. Five kilometres upriver is a hot sulphur spring. From November to May, the mountains are filled with rainwater, and rivers and waterfalls cascade down the valley sides, and tumble towards the Rio Mondego. Above the valley is a wide-open landscape, with patches of forests and bold granite outcrops. The thinner top soils of these granite plateaus support native forests of chestnut, oak, hawthorns, stone pine, and ash, but there is little agriculture, and very sparse populations. The water and the air in this region are free of pollution.

The abundance of biodiversity displayed in the valley is a reflection of the variety of eco-systems and habitats that exist. The river itself is a home to a variety of reptiles, amphibians and insects, and many mammals drop down to drink or forage, especially at night, including badgers, foxes, wild boars and genets. The river line supports alder and willow trees, and a wide range of medicinal plants including datura, urtica and mullein. The wide water meadows that surround the river were traditionally the food stores for the villages, with plantations of grains and root crops, for as long as there has been agriculture. In the past centuries, rye, maize and potatoes were the staples, and vegetables such as cabbage and pumpkins are also popular.

The mountain climate is harsh and extreme here, with continuous heavy rains in the winter months, and dry, hot summers, when the river sometimes becomes only a trickle. But if you look closely at the landscape, you will notice that the main artery that is the river is fed from both sides by other major arterial systems. Rain water falls evenly throughout the valley, but it collects together into water-lines, and creates underground rivers, that reveal themselves during the winter months, and continue to flow under the surface throughout the year. These seams of liquid gold provide the life-blood to the valley. On the surface, the plant life, including species such as Phytolacca and viper’s bugloss, provide a tell-tell story. Historically, the ancestors collected and stored these winter rains in a series of wells, water-mines and tanks, and through careful water management, the irrigated areas were expanded to support large populations. This was and is a forest garden agro-ecology landscape. On the higher slopes, you can find small vineyards nestling beside olive groves, with fruit trees of all types growing in a maze of natural abundance, and close to the ridges are forests of oaks and chestnuts, that have for centuries provided food, firewood and building materials.

At the northern tip of the valley is the Neolithic temple of Fraga da Pena; nine kilometres down river, is another temple site called Castro de Santiago. These were sacred sites and lookouts for the inhabitants of those times. They also left us Dolmens and Orcas as reminders of their devotional practices. These were the Lusitani, and it is clear from these archaeological monuments that there was a sizeable population supported by this valley more that 7000 years ago. There are no written records of life in those ancient times, but when the Romans arrived, some five millennia later, they would have found a thriving community with an already ancient history, and a tried and tested system of forest garden agriculture, supported by horizontal water mines that penetrated 60m into the mountain, with heavy lintel stones above that have safeguarded the flow of water from that day to this.

The Romans built a road that drops down into the valley and returns back up to the ridge, and the valley provided food and sustenance to soldiers, traders and other travellers for the next five hundred years. No doubt, the natural resource of these mountain slopes was further enhanced during this period of occupation, with the introduction of the olive and the Roman flare for natural engineering and irrigation.

The 8th to the 12th centuries saw the spread of Islam throughout Iberia, and connected this remote mountain community to a new paradigm, with its own agricultural and irrigation traditions, new cosmologies and new practices. From 11th century onwards, the expansion of Christianity resulted in the medieval kingdom of Portugal, and the rest, as they say, is history. In 16th century, the Noble family Beltran established feudal control, and with the construction of the Solar and Capela de Girões, they placed their own unique stamp on the valley. Originally from the court of Madrid, they adapted to become the Beltrão of Portugal, and maintained their seat until 1948, when the reins were finally passed to the Catholic Church.

From the original people to the current age, the tides of culture have ebbed and flowed, through cycles of subjugation and liberation, periods of expansion and contraction; throughout this long voyage, of more than 7000 years of subsistence, our predecessors cultivated the same fields and terraces, using only hand tools, and drawing their water from the same springs and wells.

This unbroken chain of subsistence living is the fundamental heritage of humanity. But in recent times, a new trend began to emerge. Triggered by the industrial age, and fuelled by the heady mix of war, oppression and the yearning for change, rural populations began to dwindle. Waves of migrations swept people away from their fields and forests, and washed them up in cities. The diaspora from Vale das Lobas took hold in the 1970s, and families settled in Central Europe, Brazil and USA, leaving only the elderly to take care of the lands – the final custodians of an ancestral tradition.

Where once sheep and goats roamed the hillsides, now the eagle soared over uncared for terrain. Fruits and olive trees untended and unharvested, became entangled in bramble and broom, and returned gradually to the wild. Bush fires levelled the playing field from time to time, and the landscape took on the aspect of abandonment. Time passed. The migrants raised their families in new surroundings, and for their offspring, born as citizens of a different world, the link with their homeland became weakened and even broken. Grandmothers continued to collect the olives, and even make the wine, but now there were fewer people to help with the harvest. They wept for what had been lost; they themselves felt abandoned, relics from a past that no-one cared for or wanted any more.

Every beginning has an end, and all things must change. The ebb and flow create a cycle, and what is real cannot be denied forever.  The people who left perhaps will not return, but the valley has seen these comings and goings many times before. There is a new wind blowing now, a post-industrial yearning, mainly within urban populations. They are rejecting the hollow resonance of the consumer-based lifestyle, and searching for a deeper connection that links them again with ancestral tradition. The era for blindly consuming the resources of the Earth is coming to a close, and it will eventually be replaced by the understanding that we are participants in a living planet.

It is in this context that in the project Vale das Lobas was born. Vale das Lobas means “Valley of the She-Wolves.” The wolf represents instinct, the spirit of wild nature, and a well-ordered community, where everyone has their role, and all are cared for. Vale das Lobas embodies the spirit of transformation, and the inspiration to establish the world that we want to see for our children and grandchildren.

It is part of an emerging new paradigm that recognises that the Earth is being poisoned by toxicity, which is causing an unprecedented escalation of extinctions and disasters. To counter this trend, there is a global movement to support the increase in biodiversity, as we recognise that this is the single most significant indicator for health and resilience in the natural world.

Vale das Lobas is a seedbed for research and actions into living in balance with nature – including the support of bio-diversity, nature conservation, reforestation, water harvesting, traditional artisan crafts, natural medicine, sustainable construction, renewable energy, agro-ecology, regenerative agriculture, informed by ancestral wisdom integrated with innovation. As a living model, we are advancing solutions in the spirit of experimentation and discovery.

A cornerstone of our strategy for nature regeneration is the creation of Serra Lusa Biodiversity Park, in partnership with community stakeholders, including Municipal and civic organisations, the Hunting Association, The Catholic Church, Schools, Universities, and international partners including Rewilding Europe. Serra Lusa Association has as its vision statement: A sustainable, peaceful and healthy world, and its mission is: “To establish biodiversity parks as havens for nature and wildlife to thrive.”

Sacred Earth is a community initiative, formed to gather investments for regenerative projects for the New Earth, including Vale das Lobas. Any like-minded individual or organisation can join this investment community and  buy shares in Sacred Earth.